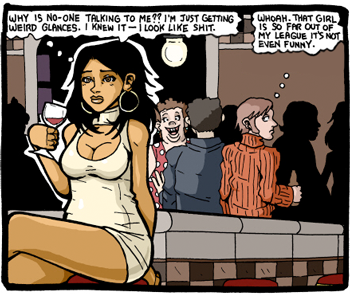 "He's nice," said Tawneee. "And he's very dependable," said Tawneee. And, as if dimly aware that this was still not sufficient, she added sadly, "If you must know, he's the first boy who's ever asked me out." [...] There were goddesses who'd kill to look like Tawneee. Angua and Sally exchanged a glance. Light dawned. Ah, that was the problem. And this one's a baaaad case.
— Thud! by Terry Pratchett
Advertisement:

This is when a character is seen as so attractive that she is never asked out, because anyone with half a brain would realize that a girl like her would reject a guy like him out of hand. It's obvious she's out of his league, so why bother to ask?

The girl, on the other hand, feels unable to ask him herself, whether because of social custom, historical imperative, or some other reason. However, she isn't out of his league at all. In fact, so many guys have refused to ask her out on the grounds that she's out of their league that she begins to feel unwanted and ask if there's something wrong with her. She will also often feel inadequate and very lonely, and this in turn compounds the problem of her not being able to ask for herself; obviously there is a reason nobody wants her, and she too is afraid of rejection, making this cyclic.

Related to I Can't Believe a Guy Like You Would Notice Me, but that trope is when a girl feels very ordinary next to a hero, yet he wants her anyway. This is when a guy feels too inadequate or ordinary to have a chance with the girl, and how she feels as a result of so many guys feeling this way.

This trope is not Always Female, but because an important part of the situation is that she cannot simply ask him, it tends to be a female trope. Leads to I Can't Believe a Guy Like You Would Notice Me if she does simply ask him. Related to So Beautiful, It's a Curse, Green-Eyed Monster and also Beauty Is Bad — if other females act bitchy to the girl just because they think she's pretty and therefore a bitch. Those whose beauty is of the intimidating, self-sufficient type often have this trope.

On whether or not this is Truth in Television, one view states that this happens in real life because of unconscious social cues sent out all the time, causing others to modify their behavior accordingly. The other view, however, states that because Most Writers Are Male, and therefore unable to fully empathize with the female mind, that the girl's loneliness and desperation for male company may be used wrongly, instead of introducing real-life complexities.

This trope might be the constant companion of someone who is an Aloof Dark-Haired Girl, be it isolation from guys or from girls.