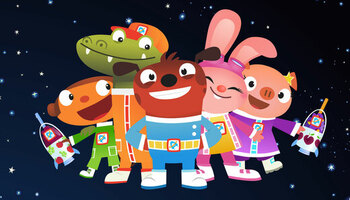 The smooth-iest crew.
So fly, zip, walk, or run
For smoothies, friends, and lots of fun
Where YOU are customer number one!
Advertisement:

Astroblast! is an American Preschool Show by Soup 2 Nuts, that begun airing on PBS Kids Sprout in July 2014. It focuses around a crew of Funny Animals who run an intergalactic smoothie café called the Frosty Star, and the problems that often arise among them. Comet, the leader, is an easily excitable dog. Halley is a pink rabbit who makes high-speed deliveries. Sputnik, a pig, tends to get overly passionate about things. Radar, a monkey, is well-meaning but usually lazy. Jet, an alligator, speaks entirely through movement. And Sal, the level-headed one, is a three-eyed octopus who usually has friendly advice.

Not to be confused with the Atari 2600 game of the same name.