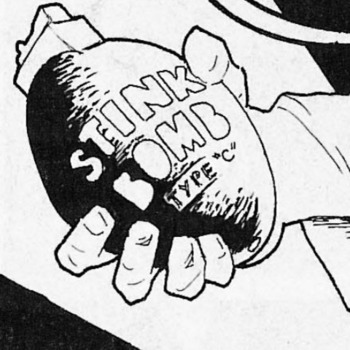 Sub-Trope of Trick Bomb, the Stink Bomb is a common item used by pranksters in school settings. In other settings, it's used as a distraction or a deterrent.

The most common variety are simply vials of either ammonium sulfide (which breaks down into several smelly gases on contact with air) or thiols (a range of hydrocarbon derivatives which smell unpleasant and evaporate quickly) which are released by rupturing them.

Depending on how potent the smell is, a Stink Bomb can work as Knockout Gas or an actual bomb of stank.

See also The Other Wiki's article on this