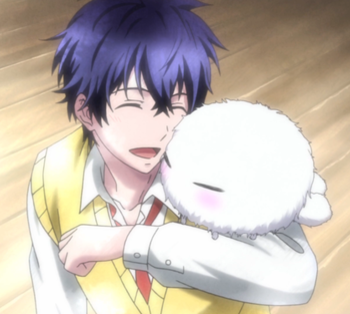 "Who's a cuddly fuzzy-wuzzy?"
"They're so cute. They're like if puppies and kittens could have babies."
— Leela talking about penguin chicks, Futurama
Advertisement:

A cute widdle creature typically consisting of fur, big eyes, maybe a Big Smile, and little else. It's probably biologically unfeasible, if not downright impossible, but who cares? It's stupidly huggable, and if the show is Merchandise-Driven, it will probably be a top seller. In many cases, it will become an easily-recognizable symbol for the show/series/whatever. You can picture the reaction: "Awwwww..."

You can easily spot one of these by the four tricks detailed on the Analysis page: oversized head, large eyes, and probably large feet and stubby limbs; soft and huggable looking; high-pitched, low volume noises; and small size.

This trope is related to an instinct, genetically encoded into almost every vertebrate to trigger mercy and sympathy in adults when they see a hatchling/pup/kit/etc with these traits.

May double as Non-Human Sidekick types, but the main purpose of these creatures is to be irresistibly cute. Sometimes, they are unconventionally cute. Their natural habitat is the Sugar Bowl, but they have been known to wander far and wide.

Depending on the series, there can be either only one or two types of cute characters, contrasting with the rest of the cast. In others (most commonly those taking place in Sugar Bowl realms), most if not all of the cast is made up of these.

If it's so ugly it's cute, it's Ugly Cute. If it can also inspire fear or uneasiness, then it's Creepy Cute. If it's not so lovable, it's a Sidekick Creature Nuisance. If it's visually appealing but ferocious, it's a Killer Rabbit. If the critter is better defined as a robot, see Cute Machines. If it's cute and capable of holding its own in battle and kicking ass at the same time, then it's Badass Adorable. If it's really not conventionally cute, then it's What Measure Is a Non-Cute?.

When the critter ends up being hated by the audience instead of loved, you have The Scrappy. On the other hand, when the cute critter becomes well-liked despite being a minor character, you have the Ensemble Dark Horse.

May cause Cuteness Overload. May be Yet Another Baby Panda.

Contrast with Eldritch Abomination (though there are exceptions), and contrast that with Did We Just Have Tea with Cthulhu? if it's a nice monster. Compare with Cute Monster Girl.