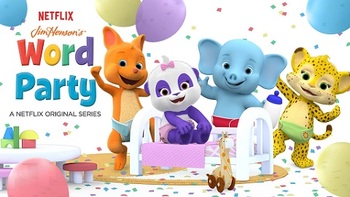 Get ready to party! With cute baby animals! note From left to right: Kip, Lulu, Bailey and Franny
Advertisement:

Word Party is an animated series targeted at toddlers and preschoolers by The Jim Henson Company—specifically, The Henson Digital Puppetry Studio (who were also responsible for Sid the Science Kid and Dinosaur Train). This interactive series stars four baby animals - Bailey the elephant, Kip the wallaby, Lulu the panda and Franny the cheetah, along with a myriad of exotic toys and a friendly off-screen narrator. The viewers takes on the role as a "big kid", whom the babies looks up to and "learns" new words from.

Most of the plot centers on the babies' playtime, which will proceed until the babies come across something that they do not know the word to, be it an emotion, an occupation, a color or an animal. The big kids are then required (with the help of Word Wally, a proportionately large robotic TV on wheels) to teach the babies the required word. Upon completion, the babies break into a party and the show ends.

The novelty of the series, however, relies on its fully interactive segments. On supported devices, an icon will pop up at set intervals that when tapped or clicked, interrupts the show and launches a flash card minigame that teaches the words relevant in the episode to the viewers.