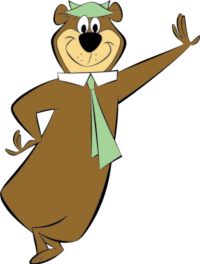 Smarter-dressed than the av-a-rage bear!
Palutena: Given his size, he also moves quite quickly. Combine that speed and power with his long reach, and you've got an opponent who's good at almost everything!
Pit: Yeah... except for dressing himself. That necktie really doesn't leave much to the imagination.
— Pit and Palutena talking about Donkey Kong, Super Smash Bros. for Wii U
Advertisement:

A variant of Half-Dressed Cartoon Animal where the only "clothing" they wear is some kind of cosmetic accessory — a hat, gloves, a bow, tie (or bowtie), a necklace, a collar, etc., or socks and/or shoes — beyond this, the character is still, well, technically naked (in, um, stark contrast to the full shirt or pants typically worn by half-dressed animals).

Sometimes, underwear or a diaper (and nothing else) can count as this trope, though it does border on shirtless Half-Dressed Cartoon Animal territory.

Similarly, they may choose the equivalent of a fig-leaf or loincloth (which borders on a shirtless Half-Dressed Cartoon Animal), the bare minimum necessary to preserve their modesty to the audience if they are Beastmen (which is a popular visual motif for depicting characters as 'exotic' or 'native' in origin.)

Like the Half Dressed Cartoon Animal, the creature's natural pelt (fur/feathers/scales/whatever) is considered an acceptable analogue for clothing, thus the subject of them being technically "naked" is seldom mentioned, unless a sudden gag (like a Non Fatal Explosion) leaves them stripped of their coverings.

Most characters of this trope are of the Civilized Animal tier or are otherwise normal animals, but Funny Animal and even Beastmen variants exist as well.

Ring Around the Collar and White Gloves examples can overlap, if it is the only article of clothing the character wears. If the trope is only ever applied to male characters, see Pantsless Males, Fully-Dressed Females.