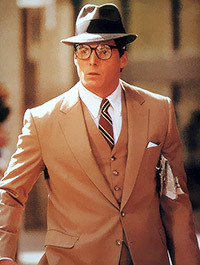 Yeah, you could probably take this guy in a fight... 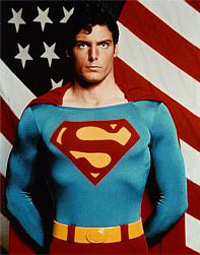 So there's this character on TV, and he looks like a nebbish. He's rather nerdy, pretty scrawny, not too attractive, and likely to faint at the mere sight of blood. What a nerd, huh?

...Until he takes his shirt off, and — surprise — he's packed! He's got abs of steel, his guns are fully loaded, and he can probably crush coal into diamonds with his massive pecs... Good Lord, he's a Genius Bruiser who's been hiding the "Bruiser" part all along!

A Clark Kent Outfit is, basically, any article of clothing that hides a character's well-toned physique from the audience, setting audiences for a surprise when it's used, especially for harmless-looking fellows. Can apply to women as well, often leading to a Beautiful All Along moment when Played for Drama or Hidden Buxom when Played for Laughs. Or both.

Note that while the actor has to be able to fit into the physique-concealing costume when this trope is used in live-action works, no such restriction applies to other media, and thus it's possible to have a character reveal muscles (or curves) that couldn't possibly have fit inside the outfit they were wearing beforehand. This can be Played for Laughs.

Compare with Badass Bookworm. Not to be confused with Clark Kenting, which has the opposite effect.

Then when he rejoins the group no one cares about his reveal and Yuri just chastises him for not thinking of a better distraction.
Takamatsu: I thought it would be surprising, that no-one would see it coming, I train in secret...
Hinata: Yes yes, put some clothes on.