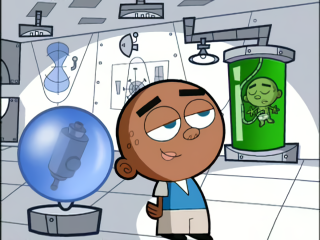 A.J. has a nice lab, complete with a lab mode switch and a backup clone body.
"Are there other Black nerds, or is it just you and Urkel?"
— Frank to Toofer, 30 Rock
Advertisement:

A nerd who is Black.

The Black Nerd is a countertrope to common racial stereotypes. Most nerds are portrayed by races who already have the stereotype of being weak or bookish, such as whites, Asians, and Jews. Black people, on the other hand, are often portrayed as jive-talking Soul Brothas, Gangbangers, or Scary Black Men. The Black Nerd upsets these trends by being, well, a Black Nerd. This is especially common in comedies, where writers are often reluctant to feed into racial stereotypes, but need flaws to make their characters funny. Giving a Black character personality flaws or traits which run counter to common stereotypes is a convenient way to add diversity, while trying to avoid accusations of discrimination.

Writers might deliberately invoke the trope to shake things up and challenge the audience's assumptions, but other times the trope is only used to turn a smart supporting character into the Token Black.

Often the Black Nerd is simply an expert in a nerdy field, such as computers, and doesn't really possess many negative characteristics commonly found in nerds of other races. This variant of the Black Nerd may become a case of Flawless Token if they have an overly high level of overall competence resulting from their intelligence, without flaws to counterbalance. There are also quite a few people that have a thing for geeky Black guys/girls, mostly due to them not being as prominent. A popular type of Token Black Friend. See also Asian and Nerdy and just plain Nerd.

Compare The Whitest Black Guy note however, Values Dissonance now tends to look unfavorably on those who equate higher education/intelligence with Whiteness, especially in an era of prominent figures such as Barack Obama, which often overlaps. Contrast Pretty Fly for a White Guy.

The trope is named after "White and Nerdy", a song by "Weird Al" Yankovic.