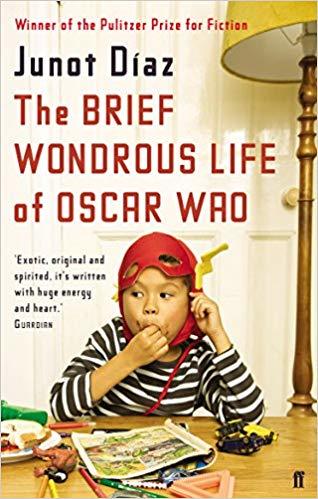 "Of what import are brief, nameless lives... to Galactus??"
—Stan Lee and Jack Kirby, Fantastic Four, (Vol. I, No. 49, April 1966)
They say it came first from Africa, carried in the screams of the enslaved; that it was the death bane of the Tainos, uttered just as one world perished and another began; that it was a demon drawn into Creation through the nightmare door that was cracked open in the Antilles. Fuká americanus, or more colloquially, fuká— generally a curse or a doom of some kind; specifically the Curse and the Doom of the New World.
Advertisement:

The Brief Wondrous Life of Oscar Wao (2007) is a Pulitzer Prize-winning novel by Junot Díaz. The story revolves around the character Oscar de León, a consummate scifi and fantasy geek with horrendous luck with women who wants to be the Dominican J. R. R. Tolkien. The story is told through his former roommate at Rutgers, Yunior, who comes off as a bit dickish when he is first introduced into the story, but grows into a better person by the time he is writing the novel. Yunior tells the story of Oscar's life by tracing Oscar's story through his sister Lola, his mother Hypatá Belicia Cabral (or Beli for short), and his grandfather Abelard Cabral's own tragic tales.

Between all of the geek references, untranslated Spanish, slang, and footnotes, you might get lost in the text and believe that Díaz assumes too much from the reader, or that he is aiming to disorient the reader. However, understanding all of his references isn't truly necessary for understanding the text.

This book contains examples of -