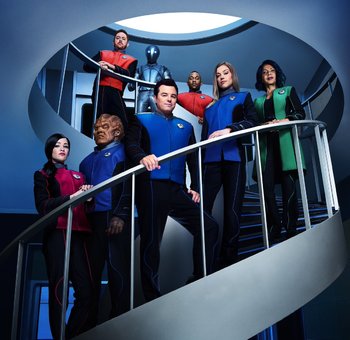 The Orville is a live action Science Fiction Dramedy television series created by, and starring, Seth MacFarlane as a homage to classic Star Trek. It premiered on Fox on 10 September 2017. It will move to Hulu for its third season. Outside the US, the series will air on Disney+'s Star hub in many countries.

Captain Ed Mercer (MacFarlane), an officer in the Planetary Union, finally gets to live out his dream of exploring uncharted space as the captain of the USS Orville, a mid-level exploratory vessel. Joining Ed on this adventure is a crew packed with colorful characters from all over the galaxy including, to his chagrin, Kelly Grayson, his XO and ex-wife.

The series has a Recap Page.

In 2019, Dark Horse Comics released a limited run of comics based on the series which help fill in the gaps between seasons. There is also a VR exploration sim

The first official trailer for Season 1 can be viewed here

and the second extended trailer here.

and wrapped in August 2021; the showrunners had hoped to air the season by the end of 2021. On September 23, 2021, however, it was officially announced it would premiere on March 10, 2022, carrying the name The Orville: New Horizons. On February 4, 2022, it was announced that the premiere had again been delayed and is now slated for June 2, 2022. The season will feature some of the final performances of Norm Macdonald, who passed away in September 2021. Watch the trailer for the new season here

Wash Your Mouth Out w/ Gordon

In "Identity, Part 2" from "The Orville," Gordon Malloy delivers a kill shot to a Kaylon vessel, declaring before doing so that it's "Time to wash your mouth out with Gordon."

Wash Your Mouth Out w/ Gordon

In "Identity, Part 2" from "The Orville," Gordon Malloy delivers a kill shot to a Kaylon vessel, declaring before doing so that it's "Time to wash your mouth out with Gordon."