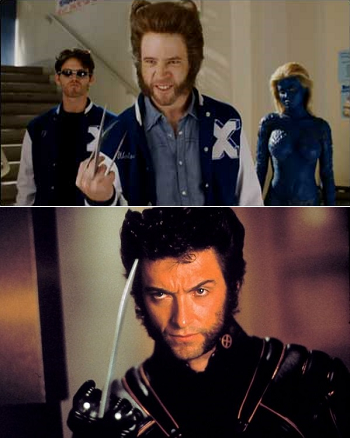 X-Men beat them at flipping the adamantium bird by seven years.
"This is one of those moments where I think, 'Oh, is my stock joke about one of the strips I cover really accurate?' and then realize 'Yes, it’s more horribly accurate than I could ever have wanted it to be.'"
— Josh Fruhlinger, The Comics Curmudgeon
Advertisement:

The original included the exact same material, perhaps as a self-aware joke, which renders the parody superfluous. As a result, the parody doesn't actually twist or exaggerate the original work. People unfamiliar with the original may laugh at the joke, but others will be put off by the spoof writer's ignorance and the redundancy of the resultant parody.

Some comedy writers avoid this trap by limiting their targets. RiffTrax, for example, refuses to mock comedies, fearing their commentary will sound too much like the original. For parodies that do this deliberately, to send the implied message "We can't make this any dumber than it already is", see Spoofed with Their Own Words, which may be accompanied by a "Not Making This Up" Disclaimer.

Compare and contrast with Shallow Parody. Not to be confused with Spoofing Spoofiness, which is when a work being parodied is already a parody.