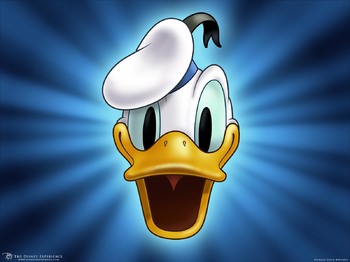 "Who's got the sweetest disposition?
One guess, guess who...
Who never, ever starts an argument? (woman: Hmm?)
Who never shows a bit of temperament?
Who's never wrong, but always right? (Donald: "Yeah"?)
Who'd never dream of starting a fight? (Donald: "That's so!")
Who gets stuck with all the bad luck?
No one ("QUAAAAAAACK!!") — but Donald Duck!" (Donald: "Yeah!")
— Theme song for the Donald cartoons (after 1947)
Advertisement:

The Ensemble Dark Horse of the Classic Disney Shorts, Donald Fauntleroy Duck is one of history's most famous cartoon characters.

In 1939, he got his own Newspaper Comic and in the 1940s, Carl Barks began making an entire comic universe based around him. Barks' role was eventually inherited by Don Rosa and the stories by these two creators are the only ones that are officially considered within the Disney comics universe.

After theatrical shorts fell out of favor, his appearances slowed down, but he was never quite out. He appeared in DuckTales as a supporting character and starred in Quack Pack. He also appeared with Daffy Duck in Who Framed Roger Rabbit, starred in the "Pomp and Circumstance" segment of Fantasia 2000, reappeared with the gang in Mickey, Donald, Goofy: The Three Musketeers and in 2004, he got a star on the Hollywood Walk of Fame. He also came back in Mickey MouseWorks / House of Mouse and Mickey Mouse Clubhouse, as well as the new series of Mickey Mouse shorts, Mickey and the Roadster Racers, the DuckTales revival (as a regular this time), and Mickey Mouse Funhouse. He appeared as a court mage and recurring party member in the Kingdom Hearts series of video games, to say nothing of the few games he got to himself such as the fondly remembered Quackshot. He is the protagonist of Legend of the Three Caballeros.