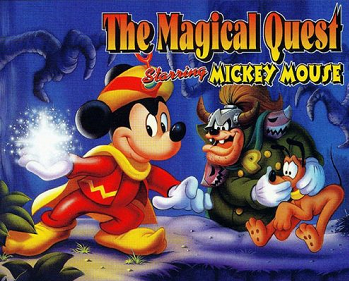 A series of three video games, released by Capcom for the Super Nintendo, and later ported to Game Boy Advance. The Magical Quest games take Mickey Mouse and (depending on the installment) Minnie Mouse or Donald Duck on a quest to give Peg-Leg-Pete the boot, out of the Magical worlds.

The game's main gimmick is the ability to change the character's outfit during gameplay, so as to use different powers to defeat Mooks or make for easier platforming.

This video game series has examples of: