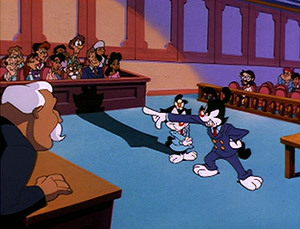 OBJECTION! I intend to prove his innocence beyond a shadow of a Dot!
Advertisement:

This is an episode that's structured around a court case, in a series not normally focused on litigation. In other words, it's an Out-of-Genre Experience where the genre being shifted into is "Law Procedural."

Because lawyers get to have all the fun in court, you can expect a major character to be incongruously forced into playing one. They'll almost always succeed in arguing their case despite not actually having a law degree, or indeed starting the episode with any clue about what they're doing.

You should also expect a boatload of Courtroom Antics, for reasons reminiscent of the Second Law of Metafictional Thermodynamics: since the writers don't normally have the opportunity to write such things, they'll feel obligated to cram in all their favorite ones.

Compare Jury Duty and Rogue Juror. See also Prison Episode, which this sometimes doubles as. (Or is sometimes followed by.)