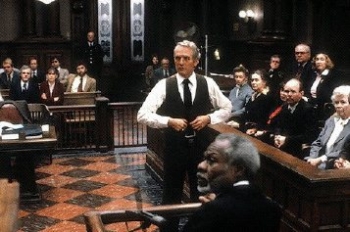 "[W]e should never lose sight of the fact that even a person accused of the most heinous crimes, and no matter the likelihood that he or she actually committed those crimes, is entitled to the full protection of the [law]. Short-cutting or short-circuiting those rights affects not only the accused, but also the entire reputation of the criminal justice system."
— Decision of the Canadian Supreme Court in R. v. Burlingham, [1995] 2 S.C.R. 206.
Advertisement:

Watch the lawyers do their thing. Also commonly known as a Courtroom Drama, this is a work of dramatic fiction principally about litigation: be it civil or criminal cases, with the latter being more common because it often makes for better drama note Courtroom time tends to be pretty boring in a civil case, either talking about points of law that don't make sense to anyone who hasn't been to law school, mind-numbingly obscure testimony from experts, or offcourt bargaining/paperwork where the parties just agree to sign documents to get over it. Criminal law on the other hand is about crime and punishment, which anyone can easily understand and involves high-stakes that can make or break people's lives, which is actually fairly riveting to watch.. A military courtroom drama is one of the most common subgenres.

Most crime dramas focus on criminal investigations done by law enforcement officers (in the form of a either a Cop Show or a Police Procedural) and does not often extend to anything happening in a courtroom. In such works where courtroom drama only lasts a single or in a few episodes only, it's a Courtroom Episode.

If you're looking for works about people who make the law, see Government Procedural.

Courtroom Antics are to be expected. Also see The Courtroom Index for a list of common tropes.