Series / This is Wonderland 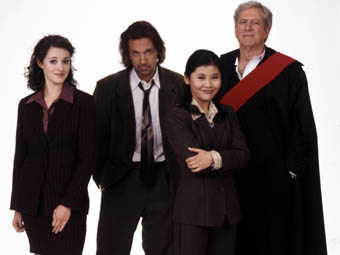 Canadian courtroom dramedy that ran from 2004 to 2006, winner of four Gemini Awards. Set in Toronto's Old City Hall courtrooms, it gave a much more realistic and unromanticized view of courtroom procedure than most similar shows: instead of there being a Mystery of the Week, there would be multiple cases per episode, and most of them would go to Plea Court, Bail Court, or the ever-depressing Mental Health Court. Very rarely would a trial actually commence, and very rarely would the case be particularly high profile. It was usually stuff like Illegally Being on the Premises or drugs.

It focused primarily on a young defense attorney named Alice De Raey, who is basically good-natured but has the tendency to swear under her breath. She is occasionally helped by scary-efficient Vietnamese-Canadian law student Nancy Dao, given frequent helpful advice from scruffy and sex-crazed defense counsel Elliot Sacks, and not helped at all by her boss, James Ryder, who is in the middle of a nervous breakdown.