Did I Just Say That Out Loud? 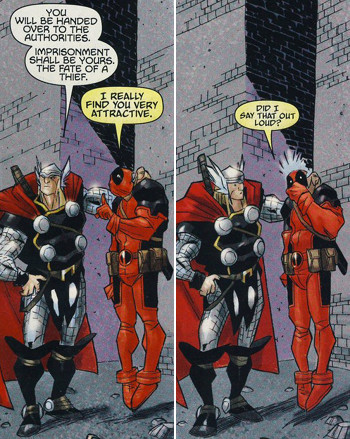 This being Deadpool, he may be legitimately unsure.
"...well, we'll just have to cut his head off and bury him somewhere, 'cause it goes without saying that we can't turn him loose. He'd report us at once to some kind of outback Nazi law enforcement agency and they'll run us down like dogs.
...Jesus, did I say that? Or just think it? Was I talking? Did they hear me?"
— Raoul Duke, Fear and Loathing in Las Vegas
Advertisement:

A subtrope of Fee Fi Faux Pas. Closely related to Open Mouth, Insert Foot. See also: Forgot About the Mind Reader, Can't Believe I Said That, Is This Thing Still On?, Saying Too Much, and Accidental Public Confession. May have some relation to Thinks of Something Smart, Says Something Stupid.

After transforming into a giant red panda and fleeing from her mother, Meilin Lee runs into a convivence store worker that she has a crush on...

After transforming into a giant red panda and fleeing from her mother, Meilin Lee runs into a convivence store worker that she has a crush on...