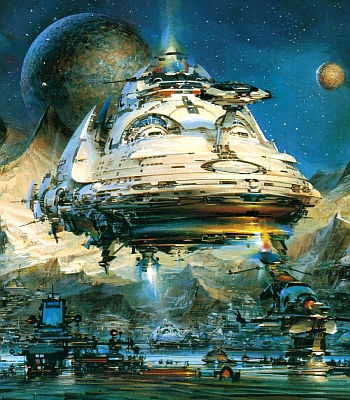 Try as you might, your ships will never be as cool as John Berkey's.
"The only thing between you and the vacuum of space is six feet of solid style."
— Spore
Advertisement:

The cool ship can be a spaceship that many other characters consider a piece of junk. In fact, you get extra points for junky. If you can't call it a rustbucket, though, it has to be the one and only latest, just-about-a-prototype, bleeding-edge techno-miracle.

An ancient living Precursor-craft, retrofitted with the latest techno-miracle gadgetry disguised as a rustbucket, that can think for itself... Okay, dude, quit hogging the cool.

A form of Cool Ship. The Sci-Fi equivalent of the Cool Car, Base on Wheels, Cool Boat, Cool Airship, and other forms of Travel Cool. In fact, because Space Is an Ocean, it is often heavily inspired by the Cool Boat; many spaceship types are named after equivalent water ship types. See the Standard Sci-Fi Fleet for various types.

Cool ships can even be single-seaters or maybe doubleseaters with no room to get up and walk around but capable of zipping across the cosmos in no time. The lack of facilities is a non-issue, Hand Waved for the Rule of Cool.

To be even cooler, the cool starship may also be a Faceship or come with escape pods, lasers, faster than light drive,note If it really is a star ship, i.e. designed to cross interstellar distances, then it had better have a faster-than-light drive if you don't want to wait several thousand years to get where you're going, and transporters, which may be used to travel to and around any number of Stock Star Systems. If enemies try to board it, you may need to activate the Self-Destruct Mechanism.

If the cool starship has enough surreal qualities, it may be an Eldritch Starship as well.