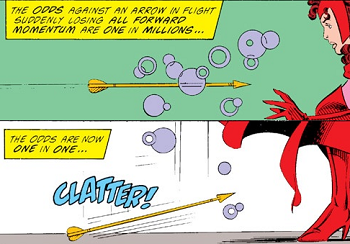 "Einstein would turn over in his grave. Not only does God play dice, the dice are loaded."
— Chairman Sheng-ji Yang, Sid Meier’s Alpha Centauri, "Looking God in the Eye"
Advertisement:

A character is able to alter the laws of probability for a local area, resulting in "good luck" for them or "bad luck" for the opponent in the form of random and unlikely incidents happening spontaneously. The Dragon chasing you over a suspension bridge? Use this power, and the bridge's otherwise imperceptible design flaws will suddenly make themselves present, causing the bridge to collapse just as you make it across, but before your pursuer does. Need to stop a supercomputer from launching nuclear winter? This power will cause its state-of-the-art, Nobel-prize-winning software to crash spectacularly.

The only thing bad about it? Usually, you won't have any control over how probability is altered. You can have a specific outcome in mind, but there will always be a chance it won't work, or worse, turn against you at the worst possible time (namely, whenever you're about to save the day). Meaning your control over the forces of reality... well, y'know... isn't. This may mean that while the universe will look out for them on the big stuff (their survival, saving the world) they might be very unlucky in normal life.

That said, because almost everything theoretically has a chance of happening, when cranked high enough, this power begins to overlap with Reality Warping. When this power lacks punch, on the other hand, it can easily slide into What Kind of Lame Power Is Heart, Anyway? for the reasons described above. Sometimes it even alternates between the two, and sometimes it can be both. Immune to Fate is related to this trope in a sense,note Both are defined as Screw Destiny as a superpower, but this trope is more about actively screwing Destiny, while Immune to Fate is about one person passively being able to Screw Destiny. but not completely comparable. Some interpretations or inversions of this power could be related to Doom Magnet.

This is for characters who can actively and consciously change the laws of probability in their area, or if such alterations would constitute a Necro Non Sequitur. Just having everything go your way is being Born Lucky. Keep that in mind when adding examples below.

In games, this kind of ability may be represented by a Luck Manipulation Mechanic.

Has nothing to do with They Changed It, Now It Sucks!. Although that would make for a good laconic description. That might be a bit too meta, however.