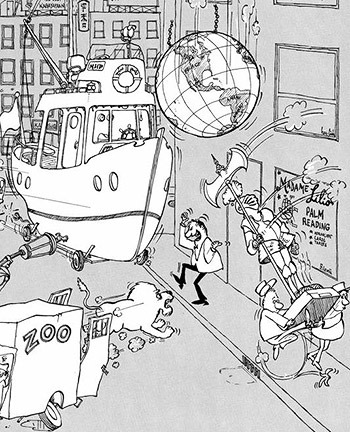 He'll be fine.
"No matter what I do, no matter how hard I try, the ones I love will always be the ones who pay."
— Spider-Man
Advertisement:

A Doom Magnet is a character, usually The Protagonist, followed by doom and despair. He himself won't feel the full sting of this cloud of doom. Instead, any character he knows, is friends with, is related to, or in some cases even makes eye contact with, is inevitably doomed to some wretched fate, be it death, or worse.

Why the character is stuck in this unfortunate situation varies. Maybe he's being punished for misdeeds done in either this life or a past life. Maybe he pissed off a witch or a god or some other powerful entity and got himself cursed. Maybe his enemies are vindictive or sadistic enough that they've made it their personal mission to make his life a living hell. Maybe the world or even the universe has it out for him. Or maybe It Sucks to Be the Chosen One. Whatever the cause, this character always indirectly has collateral damage all around him.

A character like this usually does one of two things: He either goes about his life, not caring that this is happening, or he goes about life lamenting about how he can't stop causing suffering.

Any Hitman with a Heart especially runs the risk of suffering this.

Related to Cartwright Curse, and Mike Nelson, Destroyer of Worlds. The more savvy sufferers keep their It's Not You, It's My Enemies speech ready.

The Jinx is a lighter version, causing unlucky incidents but rarely deaths. If locations tend to suffer instead of people, then the hero is a Destructive Saviour. When the doom happens to a large number of redshirts around the main character, they're a Walking Disaster Area; this tends to leave major and supporting characters alone. A further exaggeration is Walking Wasteland, where a character literally causes plants to die and the environment to become dark and dreary. If the character takes this trope badly, then this can result in Survivor Guilt. Compare The Millstone, where the character is the one causing the misfortune for others, usually through their own incompetence.

Compare with Contrived Coincidence. Compare and contrast Deus Angst Machina and Trauma Conga Line, if the character in question also suffers from all this doom. See also Weirdness Magnet.