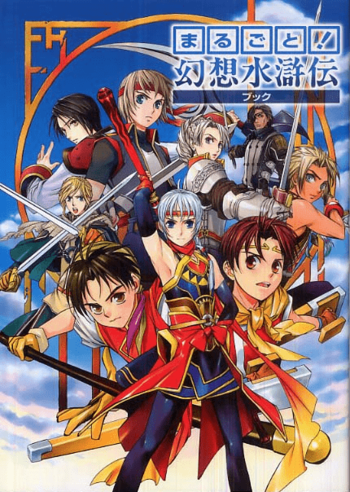 The Main Protagonists of the franchise up to Suikoden V. Not depicted: their armies.
Advertisement:

Suikoden III is a deviation from the other games. It is about a trio of heroes, each of whom has an equal chance of possessing the game's MacGuffin, the True Fire Rune. The player eventually must choose who acquires the Rune, which determines how the final battles play out.

The Suikoden universe is encompassed by 5 main console games, Suikoden, Suikoden II, Suikoden III, Suikoden IV, Suikoden V and a group of spinoffs: a Strategy RPG game Suikoden Tactics (Rhapsodia in Japan); two canon Visual Novel games called Genso Suikogaiden 1 and 2, featuring the adventures of Nash Latkje which provide background to Suikoden II and foreshadowing for III; a GBA adaptation of the card game shoehorned into a retelling of Suikoden II's plot; and a Nintendo DS spin-off called Suikoden Tierkreis, which is set in an alternate universe unconnected to the main Suikoden world, none of which save Tierkreis have seen an English language release. There's also a slot machine game released in 2010, which saw the fans basically thinking "so this is how it ends, huh?". Ultimately, a last spin-off game was released on the PSP in 2012, known as Suikoden: Woven Web of the Centuries, but it was never localized.

Following Konami's decision to no longer make AAA games and focus on the mobile market (along with several other decisions which earned them the ire of players), the future of the series is looking bleak (if not outright nonexistent), leaving many fans disillusioned (despite the only pachinko installment of ээSuikodenээ listed below being made way before Konami became notorious for it).note And for some unknown reason, Konami hasn't even made a mobile gacha game out of Suikoden, despite it being an easy money-making tool and also in-line with its bad reputation now. Not to mention Suikoden's massive library of characters seeming like a very good fit for a collect-a-thon gacha game. To some, however, even before Konami's infamous debacle, they have considered Suikoden dead since Tierkreis and Woven Web of the Centuries for doing away with the extensive world-building of the 27 True Runes that was established with the first 5 mainline games and going for an Alternate Universe, made worse with how they have lost the original writer of the saga since the second game, Yoshitaka Murayama.note According to interviews, Murayama left Konami on a good note from both sides. This makes sense given at that point, there hadn't been massive changes in Konami's management that turned them into the hated company of the 2010s; there were also other stories that Murayama was thinking to rejoin Konami, but hearing those disastrous news made him backpedal silently. It was said he planned for scenes that would have all the owners of True Runes in order to progress with the story but, unfortunately, said plans don't seem to have a chance of being realized in the near future.

Murayama, however, unveiled that in 2020 he would start a project known as Eiyuden Chronicle Hundred Heroes, using Kickstarter funding

with hopes that it would be Suikoden's Spiritual Successor, akin to what Bloodstained: Ritual of the Night did to Castlevania.