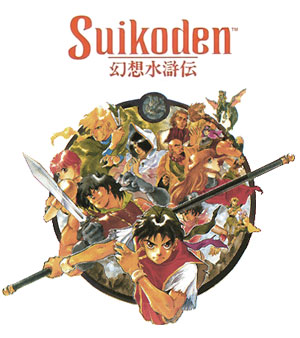 "Even at his most powerless, man's existence is never without meaning."
Advertisement:

The first installment of the Suikoden series; naturally, many of the series' long-running themes are established herein.

The young son of imperial General Teo McDohl lives a comfortable, happy life in the Scarlet Moon Empire with his famous father, house full of personal bodyguards, and best friend Ted. However, everything gets turned upside down when he winds up with the Soul Eater, one of the 27 True Runes, stuck on his right hand. Turns out the empire's really interested in said True Rune, and young McDohl finds himself roped into the Liberation Army and forced to face off against his father and his country.