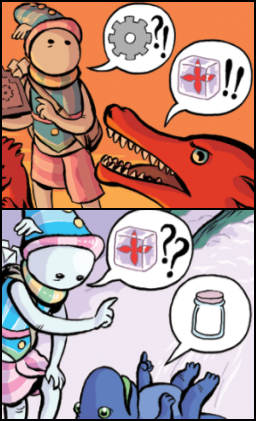 "He traded sand for skins, skins for gold, gold for life. In the end, he traded life for sand."
— Squandered Resources,

In a comedy, the chain either collapses or is rendered moot at the end. One common way of this happening is that the item the character at the end of the chain received breaks or is otherwise unsatisfactory, and the character decides to take his original bartered-away item back. The next character decides that, if he doesn't get what he wants, he'll take his original item back as well, and so on and so forth all the way back up the chain. An alternative to this is that character Z wants what character A originally needed, thus closing character A off from the loop.

type number (550). The best-known variants are "Ivan Tsarevitch and the Grey Wolf" and "The Golden Bird", both of which follow the same pattern: The protagonist is tasked (by a wolf in the first story, a fox in the second) to steal a bird from a castle. He gets caught, but the king of the castle offers to give him the bird if he'll steal a horse from the second castle. He gets caught again, and sent to fetch a princess from a third castle in exchange for the horse. In the end, with the help of the wolf/fox, he manages to keep all three.

In video games, this can be an extension ("extension" being the key word) of a Fetch Quest, as once you've fetched (or otherwise acquired) the first item, you just have to "fetch" the NPCs willing to trade for it.