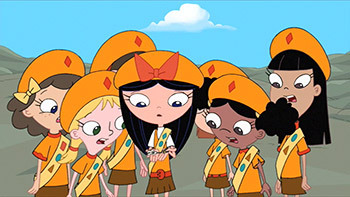 "Turn to the TV Tropes section of your Fireside Girl Handbooks."
Advertisement:

The Boy Scouts and Girl Scouts (or "Scouts" and "Girl Guides" in most of the world outside the United States) are ubiquitous institutions around the world. Almost everyone knows someone who's in them (or was in them during childhood or adolescence). So, it is no surprise that in the land of fiction that they would appear.

However, there's a problem: The Scouts are trademarked.note In the U.S., "Scout" has been trademarked by the Boy Scouts of America. The Girl Scouts also cannot call themselves "Scouts" because it violates the Boy Scout trademark.

Thus, rather than bother with obtaining permission, writers make a Bland Name version of the Scouts (which also makes them their respective theme park versions).

All Girl Scouts will only deal with selling cookies (and often be evil) while the Boy Scouts will only do merit badges, often for random and absurd reasons. Sometimes they'll combine the two, and you'll have male and female scouts selling cookies to get merit badges. Boy Scouts also occasionally help old ladies across the street. Usually the Girl Scouts are renamed something involving flowers or other girly thingsnote In real life, the UK junior Girl Guides were originally the Rosebuds but were renamed the Brownies because the girly name was off-putting to tomboys, and the Boy Scouts are usually renamed something related to wilderness or camping.

The scouts may go on a camping trip at Camp Wackyname to canoe and roast marshmallows. To add drama, a rainstorm and a Hard-to-Light Fire may turn it into a Horrible Camping Trip.

There's some Truth in Television to this, as real-life alternatives/knockoffs/spinoffs to the Scouts have appeared all over the world.

Remember not to include Averted Trope examples where the actual Boy or Girl Scouts organizations make an appearance.

Not to be confused with Shout-Out, which this trope's name is a pun on, or the colloquial term for reconnaissance.

Elmo, Abby, and Cookie Monster pretend to be a scout organization helping bugs in need.

Elmo, Abby, and Cookie Monster pretend to be a scout organization helping bugs in need.