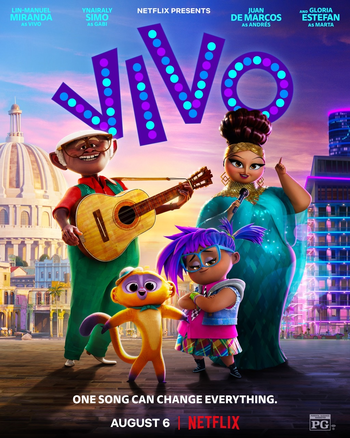 Vivo is a 2021 computer-animated musical film produced by Sony Pictures Animation and directed by Kirk DeMicco (The Croods). It stars Lin-Manuel Miranda as the title character, who also composed songs for the film; it also reunites Miranda with In the Heights scribe Quiara Alegría Hudes.
Advertisement:

Vivo is a one-of-a-kind kinkajou that plays for audiences in Havana, Cuba. He may not be able to speak to his human Andrés, but they bond over music and companionship. One day, an Old Flame from Andrés' past invites him to her farewell concert in Miami, but tragedy strikes before he can leave, forcing Vivo, along with Andrés' grand-niece Gabi, to go on a quest to deliver a love song in his place.

Tropes for this film include: