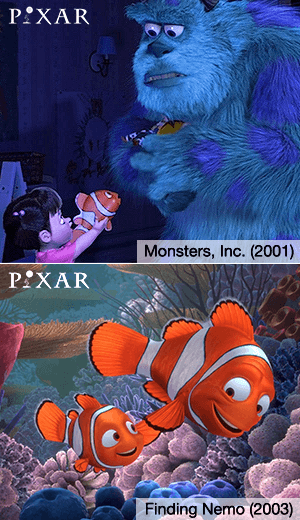 In retrospect, this is quite fishy.
note Top: Monsters, Inc. Bottom: Finding Nemo.
"...Oh, sorry. I keep saying crazy-sounding stuff, don't I? Hey, remember me, okay? This is probably the last time I'll be able to drink freely like this... If I ever see you again, I'll tell you more of my story. ...Of course, it'll probably have nothing to do with your problems."
— Vincent Brooks, Persona 3 Portable
Advertisement:

When something said or appearing in a work Foreshadows another work that would be produced by the same people later.

If this happens in the same continuity as the work they appeared in, it's an Early-Bird Cameo. If it happens in another work that has already been made, but you haven't seen it because it hasn't been localized, then Marth Debuted in "Smash Bros."

When this happens the other way around, it's a Production Throwback or a Company Cross References.