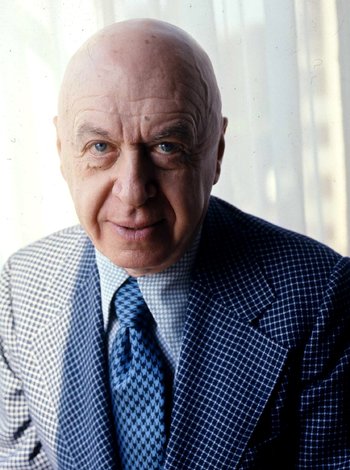 Portrait by Allan Warren.
"What counts isn't the frame, it's what you put in it."
Advertisement:

Preminger was born in Bukovina or Galicia (exactly which town is unclear), though his Jewish family moved to Vienna by the time he was ten. His interests in theater and literature lead him to take up acting, and in 1923 he became an assistant to Max Reinhardt, the famous Berlin stage director who was opening a new theater in Josefstadt, Vienna. In the mid-1920s, his acting career faltered as he started to go bald, and he took up directing instead, becoming director at the Theater in der Josefstadt in 1931 (the year of his first marriage and his first film-directing experience), and succeeded Reinhart as its manager two years later.

In April 1935, Preminger was invited by Joseph M. Schenck, chairman of 20th Century Fox, to come to Hollywood and direct movies. That October, Preminger sailed for New York, where he stayed to direct a play before moving to Beverly Hills in January 1936 and beginning directing work under Darryl F. Zanuck. After completing two unimportant and uncharacteristic films, Preminger was assigned to direct an adaptation of Kidnapped, which was even less characteristic for him. A quarrel with Zanuck in January 1938 threw him out of the production and seemingly ended his Hollywood career.

Preminger had no intention of returning to Austria, even before the events of March 1938 forced his brother and parents to flee to the United States, where Tallulah Bankhead (the actress who would later star in A Royal Scandal) helped them get refugee visas. He returned to New York for three years to direct plays, including vehicles for aging stars Laurette Taylor and John Barrymore. Ironically, his unexpected acting turn as the Nazi villain in the play Margin for Error helped restart his film career through Typecasting. 20th Century-Fox bought the film rights to Margin for Error on the request of Ernst Lubitsch, who intended to direct Otto in the film version. After Lubitsch decided not to make it, Preminger himself ended up directing the film version on an actor's salary under a short-term contract (already extended before shooting finished) with William Goetz, who had temporarily become head of production when Zanuck went into military service. (The dour Preminger would go on to replace the jovial Lubitsch as director on three more productions: the never-filmed Romantic Comedy All Over Arlene, A Royal Scandal and That Lady in Ermine, the last of these upon Lubitsch's death. Another director whom Preminger replaced more than once was Rouben Mamoulian on Laura and Porgy and Bess.)

Laura proved to be his Breakthrough Hit, and Preminger made his mark with a series of Film Noir and noir-flavored melodramas that were characterized with lengthy takes, moral ambiguity and greater psychological complexity. Preminger's films were remarked upon for their stronger roles for women. In The '50s, Preminger embarked on Genre Roulette, making films on different subjects, with high-profile subjects and great deal of publicity. He made the all-black musicals, Porgy and Bess and Carmen Jones (which earned Dorothy Dandridge an Academy Award nomination for Best Actress, a first for a Black actor), The Western River of No Return, the controversial Saint Joan and Bonjour Tristesse. Preminger's best known and most important work in this period are films which challenged censorship.

In 1951, Preminger directed the Broadway hit The Moon is Blue, and announced plans to independently produce a film version. The Moon Is Blue dealt with, for its time, risque sexual matters. The film would not qualify for Production Code approval (despite attempts to settle differences with Joseph Breen), so Preminger released it without code approval. The Man with the Golden Arm raised eyebrows not only for its candid treatment of drug use, which also failed to pass the Code, but for its spotlight-stealing credit, "A Film by Otto Preminger." Then there's Anatomy of a Murder, which also circumvented the code by discussing rape and using other phrases related to it in the film. Advise & Consent was the first Hollywood film to show a gay bar, The Cardinal was one of the most critical films about the Catholic Church, and Bunny Lake Is Missing featured the first use of the word "abortion" in a mainstream film. These movies played a huge role in loosening censorship and paving the way for other directors to start testing and challenging the Code. A liberal, Preminger along with Kirk Douglas played a role in ending The Hollywood Blacklist, by crediting Dalton Trumbo for his work as a screenwriter. Preminger put out an ad in the major newspaper a year before the release of Spartacus, which preceded his film Exodus in the release calendar. Both movies credit Trumbo in their titles.

Incidentally, his brother Ingwald "Ingo" Preminger (1911–2006) was a literary agent for Trumbo during the blacklist, and also produced two films in his own right; one of these was Robert Altman's classic M*A*S*H.

Characters played by Preminger in movies and television shows: