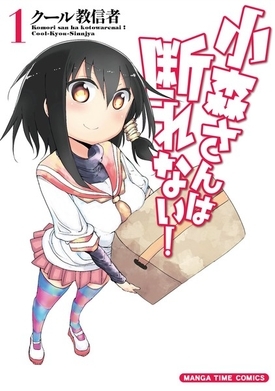 Shuri Komori is a normal middle school girl... Well, not quite. She's actually imbued with incredible competency, and when asked for honest help she just can't refuse. Even if it requires ridiculous levels of strength or willpower!

But aside from that, she's just a normal Japanese middle school girl, who hangs with her two friends, Megumi Nishitori and Masako Negishi. She gets her homework copied, helps them in studying, and all other normal middle school girl stuff.

Komori-san Can't Decline! (小森さんは断れない!, Komori-san wa Kotowarenai!) is a yonkoma manga created by Cool-Kyou Shinsha, which began serialization in Manga Time Original in 2012. It received an anime adaptation as part of the Fall 2015 Anime lineup.

Komori-san, could you help us with the Trope examples?

Komori-san, could you give us a stinger?