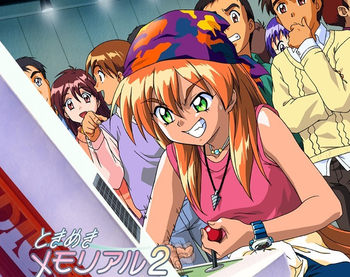 Her game skills bring all the boys to the yard!
"If you prick us, do we not bleed? If you challenge us, will we not pwn you? Now if you'll excuse me, I have to go bring some hurt to my Halo multiplayer friends, and after that, maybe I'll go enjoy a spa treatment!"
— Morgan Webb
Advertisement:

To counter the assumption that Most Gamers Are Male, stories involving games have a tendency to incorporate at least one female character that is into the same sort of games as the male characters. Going beyond just Token Minority, this character type has her own genetics that tend to show up more often than not. She's usually very tomboyish and even might be a Nerd, but because she is brought in for fanservice, she usually looks exceptionally feminine and well-kempt, she's confrontational, and self-aware of her gender, with the need to mention it more often than she should.

Also common is for this character to have high skill in games, or at least higher than the misogynistic male characters, so she can promptly destroy them. A form of Flawless Token, it was probably originally meant as a subversion, but has become so common that it's now a subversion when the character doesn't have significantly better than average skill.