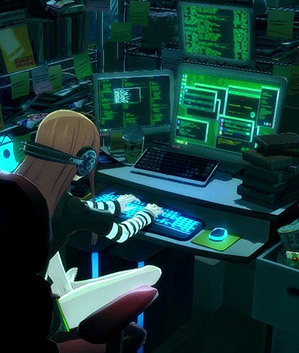 Hide yo hard drives, hide yo computers, hide yo servers because she's hacking everybody out there!
Trinity: My name is Trinity.
Neo: Trinity. The Trinity? That cracked the IRS d.base? Jesus.
Trinity: What?
Neo: I just thought, um... you were a guy.
Trinity: Most guys do.
— The Matrix
Advertisement:

The cops are hot on the trail of a hacker who is bringing down banks, shutting off traffic lights, and just generally causing mayhem.

They are given a list of possible suspects, all of whom happen to be men. After either narrowing down the list to one or two suspects, or dismissing all the suspects completely, the hero or his sidekick stumbles onto a startling revelation. The hacker is a woman.

In the minds of all officers of the law and FBI agents (even female ones), hackers are exclusively male, and having too much oestrogen allays any suspicion you might have anything to do with computers or technology in general. When the truth is revealed, the notion that anybody previously thought a woman was capable of such things is either tossed aside, or even ignored altogether.

This trope only counts when everyone thinks it's male and it's later revealed the hacker is female. It is not a list of generalized female hackers.

This is a sub-trope of Samus Is a Girl and happens to be the techie sister of the Wrench Wench and Hot Scientist. Related to the common myth that There Are No Girls on the Internet, which the Hackette in question is likely exploiting.

Not to be confused with female hacks, AKA crappy journalists.