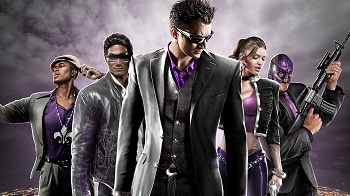 Saints Row is a Wide-Open Sandbox series of games by Volition. In the tradition of Grand Theft Auto, you assume the role of a career criminal and proceed to commit countless acts of murder, grand theft auto, reckless driving, vandalism, arson, assault, insurance fraud, theft, possessing restricted firearms, treason, and yes, even streaking, jaywalking and public drunkenness. First described as a Grand Theft Auto imitator, Saints Row began as a grim outlook on gang subculture in an urban American city, then transformed into a self-aware parody of itself as way to distance itself from the more realistic GTA games, such as Grand Theft Auto IV.

The series is set in the Shared Universe with Volition's other series, Red Faction. Additionally, Volition released a Spin-Off titled Agents of Mayhem for Windows, Xbox One, and PS4 in 2017, set in the alternate timeline that was created in the Cosmic Retcon ending to Gat Out of Hell.

Examples across the series: