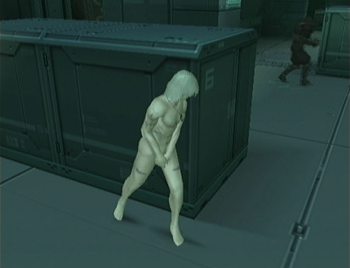 Not the proudest moment in Raiden's espionage career.
"To you who has traveled to this island... I present you with a challenge. In your travels, you've relied on the equipment you've found along the way. Here, you must cast this equipment aside and face this trial with only your wits and whatever you can scavenge."
— Korgu Chideh, The Legend of Zelda: Breath of the Wild
Advertisement:

A level where the player is stripped of all weapons and equipment. It most often is justified by having the character arrested/captured/imprisoned (usually in a case of Cutscene Incompetence), but there are other means of losing your stuff, such as an airplane crash or shipwreck. In some cases, the player has to go undercover to infiltrate an enemy building, so they must willingly give up their weapons. They may be able to acquire new weapons and equipment, rebuilding their inventory as they go along, or may just have to complete a segment of the game by using abilities which are not so easily removed, such as stealth, unarmed combat, or innate powers or magical abilities, though the latter may also be disabled. This may involve a Full-Frontal Assault if they're missing their clothes too.

If the player is ever able to regain their original inventory, expect it to be stashed all together in an easily accessible package, unused by the enemy.

See also A Taste of Power (an inversion of this which gives you late-game equipment in the very beginning of the game), Second Hour Superpower (when the first level is played without gear), Bag of Spilling (loss of equipment between games), So Long, and Thanks for All the Gear, No Item Use for You, and Non-Combatant Immunity. A variant of Unexpected Gameplay Change.