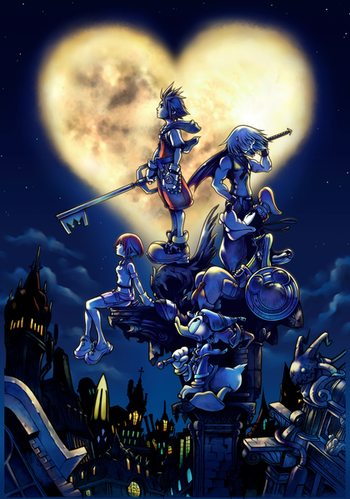 Simple and clean is the way that you're making me feel tonight… / It's hard to let it go...note Clockwise from top: Sora, Riku, Goofy, Donald Duck, Kairi
"I've been having these weird thoughts lately... like, is any of this for real or not?"
Advertisement:

Kingdom Hearts, released for the PlayStation 2 in 2002, is the first game in the Kingdom Hearts series, which merges characters from Disney and Square Enix properties along with a slew of original characters.

The story kicks off with three teenage friends: Sora, Riku, and Kairi. They live on the Destiny Islands, but seeking adventure, the trio plans on building a raft and setting sail into the unknown. But then a shadowy storm engulfs the islands and separates Sora from his friends. He soon learns that the worlds beyond his home (almost all of which are versions of the lands different Disney animated films are set in) are far larger and stranger than he ever imagined, and the same darkness that separated the trio is threatening them all. However, it turns out he now has the (very literal) key to stopping it...

The game got two Updated Rereleases. The first, called Kingdom Hearts: Final Mix, was released in Japan only late in 2002. It uses the English dub with Japanese subtitles and text, adds the Regional Bonuses given to the North American version, and contains a slew of bonus content: a new difficulty (Proud Mode), weapons, items, abilities, cutscenes, a new Bonus Boss, and a new secret ending. The second, an HD version of the Final Mix version, came with the Compilation Rerelease Kingdom Hearts 1.5 HD ReMIX released worldwide in 2013. Outside of the graphical upgrade, it has PlayStation 3 Trophy support, some slight gameplay tweaks such as assigning the camera controls to the second analogue stick, two new abilities (EXP Zero and Combo Master) and an orchestrated soundtrack. This version was then ported to the PlayStation 4 and later the Xbox One as part of the HD 1.5+2.5 ReMIX compilation with all of the aforementioned enhancements from the PS3 version as well as the addition of a Cutscene Theater Mode (as optional DLC) and increasing the in game framerate from 30 to 60fps. That compilation, alongside Kingdom Hearts HD 2.8: Final Chapter Prologue, Kingdom Hearts III + Re Mind, and Kingdom Hearts: Melody of Memory, arrived on Windows PC via the Epic Games Store on March 30, 2021.

A manga adaptation by Shiro Amano was released not long after the game. It has been translated into English twice; first by Tokyopop, then again with a new translation in 2013 by Yen Press.

Hold me…
Whatever lies beyond this morning
Is a little later on
Regardless of warning
The future doesn't scare me at all
Nothing's like before...