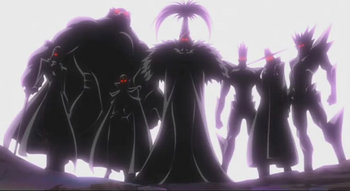 Where The Faceless meets Chekhov's Gunman. It comes in several different flavors, with a common theme. It is an abstract (i.e. not an actual scene) shot of one or more characters, who will eventually be revealed, with said character(s) shown as silhouettes. The background can be anything from bland to suitably ominous, but either way, the sinister silhouettes will typically be just standing there in a badass manner. The background music will most likely be ominous.

This shot is frequently used to either show that the hidden characters are the kind that you wouldn't want to mess with unless you were The Hero or Too Dumb to Live, or to depict them as Shrouded in Myth. May be subverted in that the silhouetted person turns out to be not as badass as had been implied. Typically a trope associated with villainous characters, though it being of The Rival is not uncommon. May have rare heroic cases.

The delivery can go about in a few ways, but most frequently, Alice could just casually mention the name of the Quirky Miniboss Squad. Bob, however, has never heard of them before, and so Alice goes through the trouble of quickly summarizing what she knows about them. As she does, it cuts to a Team Shot of them as sinister silhouettes. Said silhouettes being in intimidating poses is optional.

Other methods of presentation include it being shown as part of the Title Sequence or ending credits (often removing the shadows in episodes after the character's appearance is known). Maybe even in an On the Next or Pastel-Chalked Freeze Frame.

The Silhouette can also be used by a character already introduced. A common visual gag for an angry character is to have them in the background with a sinister silhouette and Glowing Eyes of Doom, with another character's horrified expression in the foreground.

Compare The Omniscient Council of Vagueness, which is a group of sinister silhouettes in an actual, non-abstract scene.