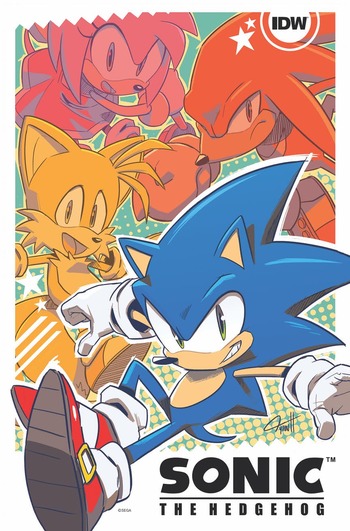 No copyright law in the universe is stopping this guy!note Well, this time, we hope.
"A new day brings new adventures! So no more lying around... Time to find out what comes next!"
—Sonic the Hedgehog
Advertisement:

In 1993, video game superstar Sonic the Hedgehog scored himself a comic book series by Archie Comics. But after 24 years, a whopping 290 issues, a Soft Reboot, and constant screwings from lawyers, the series officially ended on July 19, 2017 when SEGA formally ended its relationship with Archie Comics. Two days later, however, on July 21, IDW Publishing announced that it was far from being all over, as they had successfully obtained the license to publish a new series of Sonic the Hedgehog comics.

The comic is a clean slate Continuity Reboot, and some Archie Sonic alumni have returned to work on the comic, including writer Ian Flynn, who was with the Archie series from its 160th issue until its cancellation. The storylines are divided into "seasons" roughly a year long.

In a Forces-like continuity separate from the games, a month has passed since Dr. Eggman tried to raze the world with the power of the Phantom Ruby. But after that battle, the doctor just disappeared, leaving his Badnik army to roam the land, being more of a nuisance than anything else. Sonic is still cleaning up the mess his nemesis did to world, but then the 'bots suddenly start to perform coordinated attacks against the populace, with no signs of Eggman's involvement. He will have to team up with both old and new friends to unravel this mystery and put an stop to this threat! However this mystery turns out to be the prelude for a host of incoming new problems and threats for our heroes. But Sonic is never one to back down from a challenge and he and his friends continue to fight the good fight to protect their world.

It kicked off on April 4, 2018, with the first 4 issues having weekly installments in April and then monthly updates come May 2018. Thanks to its success, the series has had a few spin-off mini-series as well.

On September 2020, it was stated that Classic Sonic would get a special of his own as part of Sonic's 30th anniversary

. This one shot was released on June 23, note the release date of the first Sonic game 2021 as the 30th Anniversary Special. An extra story for that comic was released as a separate issue in August 14th on Free Comic Book Day. note Normally FCBD would be in May. But due to COVID concerns from 2020 into 2021, it was pushed back to August.

On a fandom project related note, see also, Sonic Rebound, which is a fan-made and mostly faithful (with its own twists) collaborated Animated Adaptation of the comics note Bear with them on updates though, they take awhile to make. As well Adrenaline Dubs videos

of the comic that adds voices to the characters (sans animation of course).

Now has a Recap Page that needs love.

While Dr. Starline has successfully usurped the Eggman Empire, much to the displeasure of Matthew, he knows that Starlame's victory will be short-lived since power unearned can be a very violate force and will get the best of him eventually, using Erik Killmonger's What If? victory as an example.

While Dr. Starline has successfully usurped the Eggman Empire, much to the displeasure of Matthew, he knows that Starlame's victory will be short-lived since power unearned can be a very violate force and will get the best of him eventually, using Erik Killmonger's What If? victory as an example.