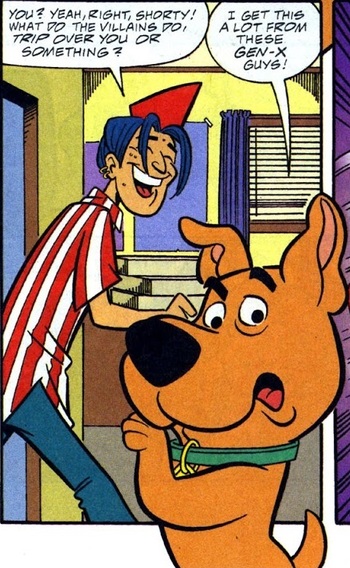 The Only Sane Man (let's call him Bob) who is surrounded by morons and never gets a break. If anything good happens to him in a given episode, it will inevitably be undone by episode's end.
Advertisement:

No matter what Bob does, no matter how noble his intentions, he just cannot get the respect of his peers. It's not that Bob deserves to be unhappy. He's a genuinely Nice Guy who in some other story would be loved and respected. But since he's in a comedy ensemble, his role is to suffer to keep the humor rolling, even if the audience finds him sympathetic.

While the "I don't get no respect" line is indelibly associated with Rodney Dangerfield, the characters he plays are not examples of No Respect Guy (those are the Unsympathetic Comedy Protagonist). Also note that the other characters have to treat Bob unfairly for him to be playing this trope. If he's as stupid as everyone else, he's just a Butt-Monkey.

Subtrope of Only Sane Man. If the character themselves complain about this, it's Dude, Where's My Respect?.

See also Memetic Loser, the Out-of-Universe version. And Kafka Komedy where the Nice Guy is always treated like crap no matter how reasonable and well-intentioned are they be.

Despite being the acting-chief and leader of the Dragon Riders, no one acknowledges his authority in any meaningful way.

Despite being the acting-chief and leader of the Dragon Riders, no one acknowledges his authority in any meaningful way.