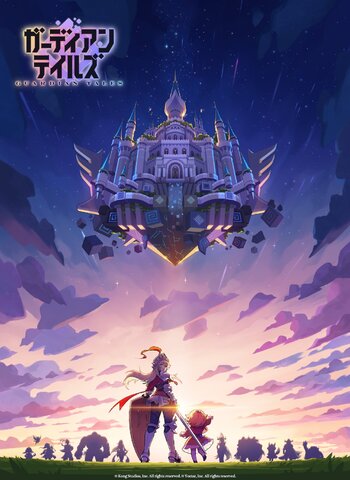 A Link to Classic Adventure.note From left to right: Marianne, ???, Sohee, Fei/Mei, Marvin, Aisha, The Knight, The Little Princess, Lilith, Craig, Coco, Kaden, ???. Above: Floating Castle Heavenhold.
This is your story.
— The Knight's Book entry.
Advertisement:

Guardian Tales is an action role-playing gacha mobile game created by American-Korean studio Kong Studios and published by Kakao Games (Global and Korea), bilibili (China), and Kong Studios themselves with assistance from Yostar (Japan). It serves as both the canonical sequel and spiritual successor to their previous game Dungeon Link, a puzzle-style mobile game launched in 2015 and shut down in 2019 published by GAMEVIL* Now COM2US Holdings. It was initially soft-launched in Southeast Asia on February 24, 2020 before its official global and Korean release on July 28 of the same year. The Chinese version followed on April 27, 2021 and a Japanese version released on October 6 of the same year, with redone art from multiple illustrators and new/re-recorded Japanese voice acting. A port on the Nintendo Switch, with Kong Studios self-publishing again, would later release on October 3, 2022, 2 years after global launch and a year after CN and JP.

The game follows you, a quiet, young, and passionate knight, as a new recruit to the Kanterbury Kingdom's Guardians. As you were about to be formally inducted into the Guardians, a sudden invasion occurs, and you team up with the captain of the Guardians, Eva, in protecting the kingdom's Queen and Princess. During the escape, a dark-robed figure incapacitates Eva and the Queen, and in the process, you and the Princess are blown away together, finding yourselves in front of the Kanterbury Inn, home to a mysterious innkeeper. Venturing into the nearby forest, you and the Princess find the emerald-colored Champion's Sword, and as you pull it out of its pedestal, you're taken to the heavens where you meet Queen Lili, Queen of Kanterbury from 500 years ago. It is then that she calls upon you, who she declares a Champion, to travel across the world to seek the other 12 Champions and restore the Champion's Sword with their blessing to finally fend off the invasion. As your quest goes on though, it seems as though you have bigger enemies to worry about than just the Invaders...

Gameplay is similar to a certain famous action-adventure game, but with the same "twin-stick" controls on other widescreen mobile games. You have a button to attack, a button to run, and a button to utilize the Weapon Skill of the character you're playing as. If the required conditions are fulfilled, you can perform a Chain Skill with other Heroes, which can have different effects depending on who you chain it with.

In short, imagine MapleStory meets The Legend of Zelda games of old...with a hint of Earthbound, a smidgen of Animaniacs, and a crapton of references tossed in.

Check the official sites for the game in English

, as well as the official website for the Nintendo Switch version

here. Also, you can check the developers' own website here

. Initially a Japanese-only work, more recent entries have now been given official translations in both English and Korean.