Series / The Kids in the Hall 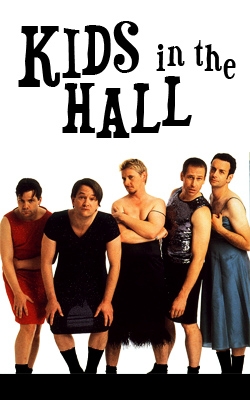 (left to right) Bruce, Mark, Dave, Scott, and Kevin, quite possibly the five sexiest men in skirts.
"I've always considered The Kids in the Hall's relation to its 'big brother' Saturday Night Live to be somewhat analogous to the U.S.'s relationship to Canada; SNL is bigger, flashier, and has more popularity (or at least more notoriety), while KITH is smarter, subtler, and much more consistent."
— Topless Robot

Surreal, often transgressional Sketch Comedy show in the vein of Saturday Night Live and Monty Python's Flying Circus, two shows to which it is often compared. Initiated and produced by SNL mastermind Lorne Michaels, the Kids in the Hall is often credited with kick-starting the "alternative comedy" boom of the 90s.

The five-man roster consists of Dave Foley, Kevin McDonald, Bruce McCulloch, Mark McKinney and Scott Thompson. Sketches revolved around a number of disparate topics but were just as likely to focus on the cast portraying themselves, albeit in odd situations. Monologues were given frequently. Guest stars were uncommon on the show and celebrities rarer still. The consistency of the sketches were quite variable and there was often a feel of being "in" on a jam session of talented comics in the process of finding out what worked and what didn't. For some, this enhanced the appeal of the show.

The hallmark of the series was that it was never afraid to go over the line when it came to people's comfort levels. The cast not only appeared in drag regularly, they often did so without any attempt to make the crossdressing the point of the skit. It was often bemoaned by Dave Foley that he looked so much better dressed as a woman... something that would form the basis of an episode of his later hit NewsRadio.

The series did air in the United States (on HBO, naturally) but it may surprise some to know that, as shocking as the series may have been to many, it was still sometimes heavily edited for content, particularly for religious topics.

The KITH band ended their show in 1995, and afterwards produced a feature film, Brain Candy, in 1996 to mixed reviews. The gang of five disbanded soon after, but soon after that they regrouped to do several tours throughout The 2000s. In 2010, the troupe came together to produce a reunion miniseries, Death Comes to Town.

The original series remains a popular and memorable viewing experience in reruns. In March 2020, it was announced

that Amazon would bring the series back for a new season consisting of eight episodes. Then the COVID-19 Pandemic happened. As a result, filming was delayed until May 2021, with production completed a few months later, and the new season being released on May 13, 2022.

Tropes in the Hall:

Alternative Title(s): Kids In The Hall