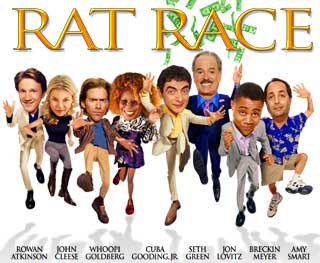 "It's a horse race with animals who think, and lie... and cheat... and play dirty!"
Eccentric Millionaire Donald Sinclair
Advertisement:

It's another great day in Las Vegas, and casino tycoon Donald Sinclair (John Cleese) is getting bored. So, six 'lucky' contestants are invited to meet with Sinclair for the gambling opportunity of a lifetime: a race to Silver City, New Mexico. The prize? A duffel bag stuffed with two million dollars, stored in a locker at the train station. Each contestant is given a GPS-tracker key to this locker and turned loose. Along the way, in their panic to get to the finish line first, the contestants have capers involving Adolf Hitler's car, a helicopter, a demolition derby, a rocket car, a human heart, and an I Love Lucy fan convention. And a cow. Seriously, the cow becomes quite important.

On the journey, they drag other people into the race, and the chaos increases.

Of course, it's never as simple as it sounds, since not only do the competitors have each other to play against, they have no idea that they are being gambled with by other multi-millionaires, betting on who will get there first. In repeated cuts back to the casino it is shown that these millionaires have no qualms about betting with other people's dignity.

The contestants and their allies:

Methods of travel used by the contestants include many types of cars, vans and trailers - including Adolf Hitler's Mercedes Benz and a courier van transporting a human heart - a taxi, a helicopter, a train, a tour bus bound for an I Love Lucy convention, a tour bus bound for a mental institution, a Monster Truck, a Hot Air Balloon, a rocket car, a horse, and when all else fails, their own two feet.

This film is an example of: