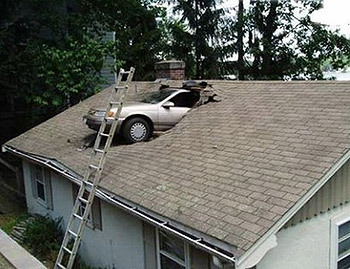 H-How did you even manage that?!
"There's a difference between a failure and a fiasco. A failure is simply the non-presence of success. Any fool can accomplish failure. But a fiasco, a fiasco is a disaster of mythic proportions. A fiasco is a folk tale told to others that makes other people feel more alive because it didn't happen to them."
— Opening narration, Elizabethtown
Advertisement:

When a normal, run-of-the-mill failure just isn't enough, you need an Epic Fail.

This is when a task that should be fairly straightforward and typical for a character goes HORRIBLY wrong in a manner that defies the laws of probability, and occasionally the laws of physics. It's when a character seems to be facing a pass-or-fail situation, a do-or-die type of test, and then fate hands them a third option: failing in a manner that's so bizarre, it's almost impressive.

We're not talking "villain tries to shoot one of his mooks but misses." We're talking "villain tries to shoot one of his mooks, misses, ricochets the shot off two walls, smashes the control panel of his Doomsday Machine, causes said Doomsday Machine to topple into a structural support inches from the mook's head, breaks the structural support, brings down the whole base in a massive collapse that destroys the villain's lair entirely, and the mook that the villain shot at is the only survivor." It's a failure so ludicrously, unexpectedly bizarre that, despite its status as a failure, it manages also to be admirable for its uniqueness and irreproducibility.

At its best, the trope can give the viewer a much needed jolt out of a sense of boredom, it can produce a laugh out of something you wouldn't think could, and it can inspire a temporary sense of fate or dramatic justice. At its worst, it can become a Deus ex Machina, rescuing the writers from the fortress of logic they have enclosed themselves within with a Hand Wave of "luck".

Often used against those who are Tempting Fate, and sometimes as a demonstration of how monumentally screwed you are in a Final Boss Preview. When epic failures come in forms that shouldn't be possible, they can be examples of Beyond the Impossible. Often this trope comes with an Incendiary Exponent, possibly because of the Rule of Cool. Disaster Dominoes are a common part of such epic failures.

Can overlap with Only One Finds It Fun for when someone tries to please a whole group of people but only pleases one of them.

Compare Critical Failure (a game mechanic meant to represent the normal ever-present danger in any action) and From Bad to Worse. Too Dumb to Live is for when a character dies (or nearly dies) because of their own stupidity. This trope is the norm for Stupid Crooks, and a hallmark of the Disastrous Demonstration. If the Fail is so Epic that reality itself breaks trying to process it, then you've managed to make a Reality-Breaking Paradox. Contrast Flawless Victory.

Not to be confused with Epic Flail (or Epic Frail for that matter), though you can certainly commit an Epic Fail with an Epic Flail if you're not careful.

If you're looking for the trope that used to have this name, it's now Offscreen Moment of Awesome. Since this title refers to a dated 4chan meme from the early 2010s, it's unlikely to be used much anymore.

"Got Him As Good As He Got Me"

When driving home drunk at night during a snow storm, Homer accidentally rear ends the back of a car. Despite his car being wrecked, he looks on the bright side that he got the other car just as bad...until he saw that it was MARGE's station wagon, in their own driveway!

This IS a DVD!

"Got Him As Good As He Got Me"

When driving home drunk at night during a snow storm, Homer accidentally rear ends the back of a car. Despite his car being wrecked, he looks on the bright side that he got the other car just as bad...until he saw that it was MARGE's station wagon, in their own driveway!

This IS a DVD!