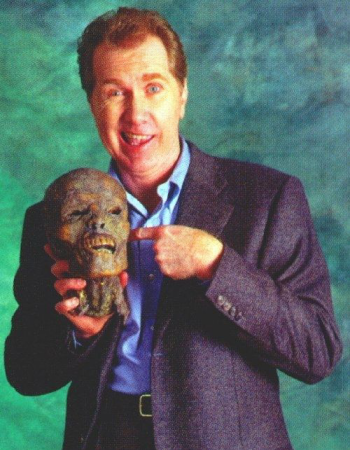 The Mayor of Sunnydale.
Jovial. Fatherly. Wants to be a giant snake demon.
"This is very embarrassing. It seems there is a red box in your car. They can’t get to it. They want me to make you unlock the car! I feel like an idiot. I don’t know what to say... I am to torture you if you don’t do it."
— Dr. Kaufman, Tomorrow Never Dies
Advertisement:

Usually, villains have a personality or manner that underscores how evil they are. They may kick puppies for giggles, be particularly insensitive and/or fanatically obsessed with their cause, or might just be too unknowable and/or eldritch to be anything but evil.

Then there are villains who are Affably Evil. There is absolutely nothing separating them from being normal, polite people except for the fact that they want to Take Over the World or use human souls to power their Artifact of Doom. They're not the Stepford Smiler or the Bitch in Sheep's Clothing—their affability is a genuine part of their personality, not a mask. And this is what ultimately differentiates them from those tropes and Faux Affably Evil. If they have underlings, expect them to be a Benevolent Boss. In a way, they're the opposite of an Anti-Hero. They may Pet the Dog on occasion, but won't hesitate to kick it with steel-toed boots the next second if it helps them accomplish their Evil Plan. They may well be a Villain with Good Publicity because, after all, being evil doesn't mean you have to be anti-social.

If this trope gets exaggerated, this villain will invite the hero out to tea, offer them a favorite dish, talk friendly, try to appeal to the hero's better nature, and convince the heroes that the villain's plan isn't worth getting involved in or is even worth joining. Of course, if the hero still won't change their mind, the villain will remind them that they are, after all, still a villain. It may or may not involve a Death Trap, depending on how nice the villain really is when crossed. Of course, inviting the hero's mom out to tea might send a stronger message. The friendliness of said villains can serve to humanize these guys. In situations with Evil Versus Evil, they are often A Lighter Shade of Black in this conflict. Alternatively, this can actually be used to make them scarier by playing up the contrast between their normal, friendly personality and their horrible, repulsive crimes.

Usually a Wicked Cultured, charismatic Chessmaster. They are sometimes comedic or a Well-Intentioned Extremist who really believes that they are right. More often than not, they are a form of Anti-Villain because a straight villain wouldn't easily be so genuinely good-natured. Evil Has a Bad Sense of Humor is not true for them, and their affability even makes them easy to "compliment" with an Insult Backfire. Captives of an affably evil villain won't be kept in dungeons, but in a Gilded Cage. Even an outright psychopath can come off as this if charismatic and funny enough. In fact legitimately insane characters can at times balance this with Faux Affably Evil more easily than sane ones, since the contrast is explained by their mental instability.

In the event an Affably Evil villain does undergo a Villainous Breakdown, the very traits that make them so pleasant often serve to make their breakdown extremely creepy or outright scary. A kind, friendly man suddenly going into a psychotic rage is made all the more scary by the simple fact that he was previously so nice and kind. If they keep their inviting personality while going Ax-Crazy, they may cross into Faux Affably Evil territory with only skin-deep manners, which is a much more frequent behaviour than a truly kind criminal.

Good Is Not Nice is the Inverted Trope, and such good guys are particularly good at giving the Affably Evil a proverbial punch in the nose. When both Good Is Not Nice and Affably Evil are used, you may end up with Polite Villains, Rude Heroes, but if done poorly, you might get a case of Jerks Are Worse Than Villains, where the audience hates the heroes for being jerks more than the villain. I'm Not Hungry is often dealing with this villain. A villain will sometimes engage in Too Funny to Be Evil to achieve this effect. No, Mr. Bond, I Expect You to Dine is a subtrope in many instances.

Alternative Title(s): Nice Is Not Good, Evil Is Not Mean, Evil Is Nice