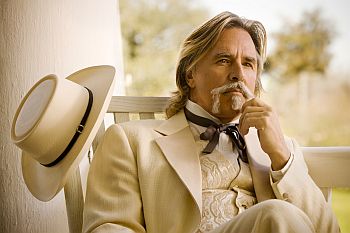 Now boy, ah say boy! Get us one of them captions over he-are. And a mint julep while you's at it.
Advertisement:

The Southern Gentleman is the Spear Counterpart to the Southern Belle.

Common virtues: Well-dressed, well-spoken (even when swearing up a blue streak), charmin', suave and invariably polite to the opposite gender.

Notes: Subject to severe Values Dissonance for modern audiences, as, depending on time period, he usually either owns slaves or is nostalgic for the era of slavery (even if he doesn't harbor any actual racist views, the romanticism of the south's Golden Age is what matters).

Associated tropes: Dixie accent, Officer and a Gentleman. Villainous portrayals include Fat, Sweaty Southerner in a White Suit, Villain in a White Suit and Corrupt Hick. May be Affably Evil or Faux Affably Evil as well, if the character is a villain.

Compare and contrast The Friendly Texan.