This page contains unmarked spoilers for the entire Borderlands franchise built up thus far. Read at your own risk. 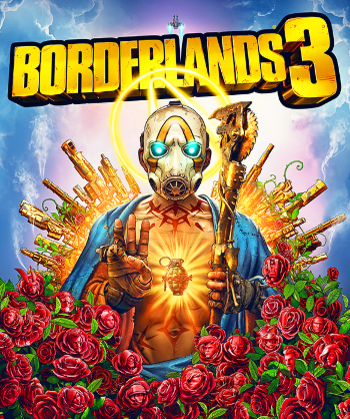 Borderlands 3, developed by Gearbox Software, is the fourth main installment of the commercially praised and successful Borderlands series.

Taking place seven years after the events of Borderlands 2, the epilogue of Borderlands: The Pre-Sequel! and the final episode of Tales from the Borderlands, vaults have opened up all over the galaxy, and a new cast of Vault Hunters are taking up the mantle to help the Crimson Raiders find them. With Hyperion no longer ruling over Pandora, the resulting power vacuum has allowed a Siren by the name of Tyreen and her brother Troy the opportunity to start a cult named the Children of the Vault, and they want to harness the vaults' powers for themselves.

The new Vault Hunters include:

Borderlands 3 was released on PlayStation 4, Windows PC, and Xbox One on September 13, 2019. The PC version of Borderlands 3 was exclusive to the Epic Games Store until March 2020. It was also released

for the Playstation 5 and Xbox Series X, with the 9th-gen version being free for those who already own it on current consoles. While yet to be implemented, cross-play support between each platform is planned.

The game's first season of DLC consisted of four campaign packs, which can be bought individually or acquired through a Season Pass. It includes the following:

This was be followed up by a second season of two DLC packs:

Always remember that you are a Troper, and you will never be clean.