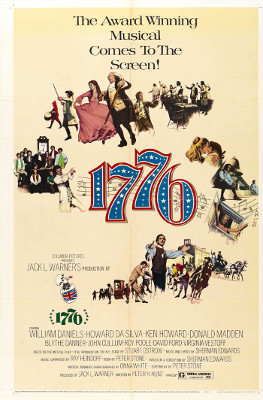 "A second flood, a simple famine,
Plagues of locusts everywhere,
Or a cataclysmic earthquake
I'd accept with some despair,
But no! You sent us Congress!
Good God, sir, was that fair?"
— John Adams
Advertisement:

1776 is the name of a 1969 Broadway play by Sherman Edwards and Peter Stone, and its 1972 film adaptation, featuring William Daniels in the role that made him a star. It's a mostly accurate depiction of the hurdles and loopholes that the Founding Fathers went through in order to separate from Great Britain... well, once you take out the all-singing, all-dancing part, it is, anyway. It could be said that one of the greatest battles during The American Revolution didn't occur on the battlefield, but in Independence Hall amongst the delegates in getting them to agree to get the Declaration of Independence passed and establishing the United States as a separate nation.

Daniels plays John Adams (later the first-ever Vice President and second President of the United States), a Boston revolutionary who spearheads the effort for the American Colonies to break from Britain and form a new independent nation. All sorts of reasons are brought up for this, including taxation without representation and the alienation that the Atlantic Ocean brings. With the help of Yoda-like Benjamin Franklin and a heel-dragging Thomas Jefferson — who is so homesick he can barely write the Declaration of Independence — he puts forth these reasons...which are almost immediately savaged. It takes a minor miracle just to get the whole thing to a spot where it can be voted on, much less ratified; that would require unanimity.

Though light-hearted in many parts (it's almost impossible to get through the number about who will write the Declaration without laughing), it also contains poignant looks at how difficult decisions had to be made (the South viewed slavery as an economic necessity and walked out en masse upon hearing Jefferson, a fellow Southerner, condemn it). In addition, a report from a soldier on the front (the haunting "Mama, Look Sharp" number) drives home just how much, and yet how little, the piece of paper will mean.

The musical got a 1997 revival on Broadway, starring Brent Spiner as Adams. A Gender Flip production consisting entirely of women and non-binary, transgender, and genderqueer actors of various ethnicities directed by Diane Paulus has been slated for a tour and a Broadway premiere in 2021.

Not to be confused with a 300 parody