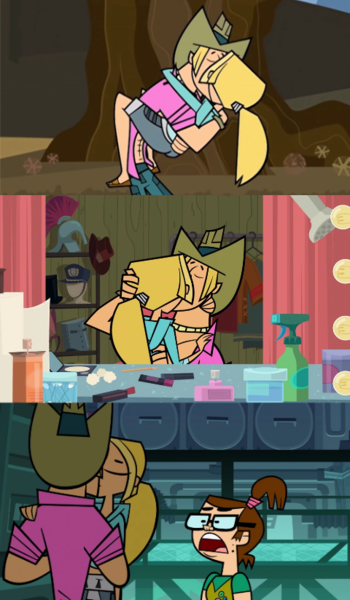 "I don't think this is the kind of action Chris had in mind."
You know I love it when you’re loving me
Sometimes it’s better when it’s publicly
I’m not ashamed, I don’t care who sees
Us hugging and kissing, a love exhibition oh
— John Legend, "P.D.A. (We Just Don't Care)"
Advertisement:

When a couple cannot keep their hands or lips off each other for more than a few seconds. Typically becomes a Running Gag, with the characters indifferent to how awkward they make everyone else feel with their nonstop public displays of affection. While the other characters are having conversations, they'll be off to the side snogging through the entire scene.

This often overlaps with its Sister Trope Sickeningly Sweethearts, but sweethearts are not necessarily this physical (see any Disney Channel show), and people who make out all the time aren't necessarily sweet to each other. Related to Coitus Uninterruptus. Named for the Motion City Soundtrack song, which is decidedly not about this trope.

During the first part of Total Drama Action, Geoff and Bridgette can't keep their hands off each other.

Alternative Title(s): Joined At The Lips

During the first part of Total Drama Action, Geoff and Bridgette can't keep their hands off each other.