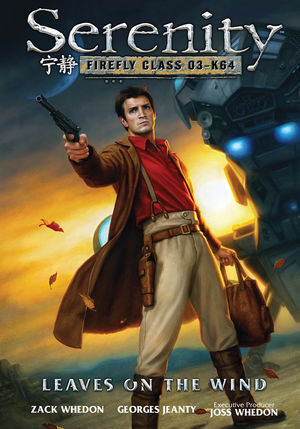 Inara Serra: I just want to know who I'm dealing with. I've seen too many versions of you to be sure.
Capt. Malcolm Reynolds: I start fighting a war, I guarantee you'll see something new.
— Serenity
Advertisement:

Serenity: Leaves on the Wind is a six-issue comic book miniseries by Dark Horse Comics, set in the Firefly-Verse and written by Zack Whedon, brother of Firefly creator Joss Whedon. It ran monthly from January to June 2014, with a hardcover omnibus published November 5, 2014.

Eight months after the events of the crew of Serenity revealing the Anglo-Sino Alliance's role in the creation of the Reavers and the deaths of thirty million people on Miranda, popular resistance to Alliance rule is mounting. Hunted by vengeful Alliance agents and still reeling from the deaths of Hoban "Wash" Washburne and Shepherd Derrial Book, Malcolm Reynolds and crew are in hiding in the fringes of the system, low on supplies and money and considering breaking cover just to find something to eat. But the Resistance finds them first.

Alternative Title(s): Leaves On The Wind