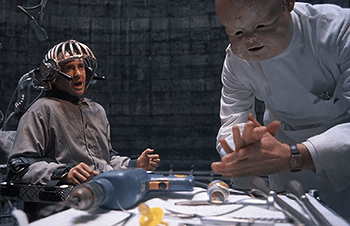 In addition to the physical torture, the doll mask adds to the psychological torture.
"Beautiful, isn't it? It took me half a lifetime to invent it. I'm sure you've discovered my deep and abiding interest in pain. Presently I'm writing the definitive work on the subject, so I want you to be totally honest with me on how the machine makes you feel."
— Count Rugen, The Princess Bride
Advertisement:

A guy who makes a "science" or "art" out of tearing body parts loose and inflicting serious pain.

The Torture Technician does just what his name implies. Residing in his own Torture Cellar, he takes the heroes and turns them into screaming, skinned shambles. He makes for prime Nightmare Fuel, as he's often sadistic to the point of overblowing it. Note that many Torture Technicians apparently believe we're still in the Middle Ages as far as interrogation techniques go. That is, if they're not down with electricity. Though a fair number favor "upgrading" their arsenal with the use of a Robotic Torture Device.

An alternative version of the Torture Technician is when he is not a sadist but completely unemotional about his job, in a Punch-Clock Villain-like way. He shows neither empathy nor remorse nor pleasure at torturing his victims, it's just a job at which he's really good. It usually makes him even scarier, since sadism is a simple thing but it is much harder to make any sense of someone who lacks any kind of emotional response to suffering. Such Torture Technicians are usually described and/or depicted as having plain and unremarkable features.

The Torture Technician typically isn't very physically strong, however. There's no real reason for him to be; all his enemies are restrained. When they do get free, however, the Torture Technician is usually taken out fairly easily, or better yet, fed to his own machines.

If he's a fat, giggling, whip-toting, possibly gay Nazi, he's probably one of these. Compare the Exalted Torturer which is basically the "heroic" version of this.

He's doing it for posterity, so please be honest.

He's doing it for posterity, so please be honest.