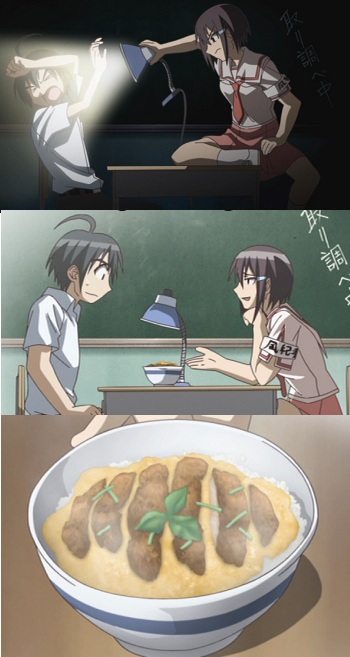 The Good Cop/Bad Cop routine is about trying to get information out of someone. Since Tropes Are Flexible, this doesn't necessarily have to be cops against a prisoner. Someone who wants information from another person will try this routine, first demanding that their captive tell them what they know, and then getting harsher in their treatment.

If that doesn't work, it's time to try being nice. They'll try to tempt them with food. How about a nice hot bowl of rice? Maybe some udon noodles will help ease your mind? Maybe a juicy steak or a cheeseburger can do the work too. It doesn't necessarily have to be a bowl or plate of food, but it does have to be food (delicious, of course) being offered as part of a Good Cop/Bad Cop routine to count for this trope.

This trope is very common in Anime, with the usual depiction of "katsudon" (rice topped with a deep-fried breaded pork cutlet, egg, vegetables, and condiments, usually served in a white and blue striped bowl), but in general every delicious plate offered to get the truth works on this trope.

Defiant prisoners won't fall for this and will reply with I'm Not Hungry.

Subtrope of Perp Sweating and Food as Bribe, and related to Good Cop/Bad Cop and No, Mr. Bond, I Expect You to Dine. See also Pet the Dog, in which food is not the only kind way to make someone confess, and Motivation on a Stick, where something, most often food, is also used to get someone to do as the other wishes. Also related to In Vino Veritas, which includes plying someone with alcohol in the hope that they'll let something slip through drunkenness. May be used by a character who believes Torture Is Ineffective and prefers to try to form a bond with the subject. Can overlap with Slipping a Mickey, in which the food probably contains Truth Serum so the suspect can tell the truth without knowing it.