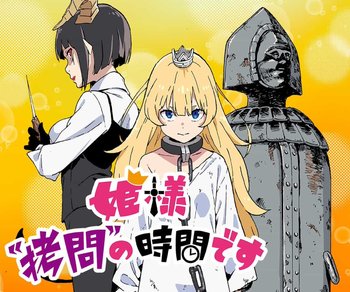 The Hordes of Hell and Imperial Army are in conflict. The Hellhorde has captured the Imperial Princess, who is also captain of the Third Legion, and imprisoned her alongside her talking holy sword, Ex. The Grand Inquisitor Torture Tortura has begun to interrogate the Princess with the most inhuman "tortures" she can conceive, like... fluffy toast, video games, and... bubble wrap?

'Tis Time for "Torture," Princess (Hime-sama, "Goumon" no Jikan desu) is a weekly manga written by Robinson Haruhara, with art by Hirakei, that focuses on our brave Princess' attempts to resist the demons' attempts to get her to spill the Empire's secrets with their horrible temptations. The manga began in 2019 and is published on the Shonen Jump Plus website

, with an official English translation available for free on Manga Plus.