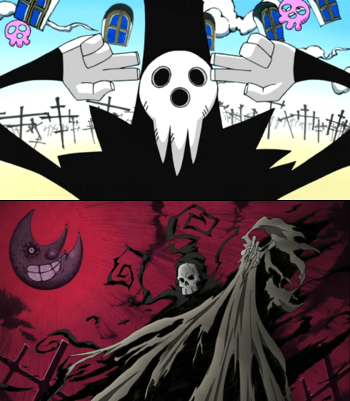 Opening: Wacky, monster-hunting hijinks
Actual Show: Eldritch Horror
The program's opening credits promise wondrous things — its images of stupendous beauty, righteous butt-kicking, and noble heroes make it clear what's to come in the story. Except, once you get into the program, you never see those things again — and sometimes, you see the exact opposite.
Advertisement:

A way of countering the Spoiler Opening trope. Sometimes a show will mix the two just to confuse the viewer horribly, or to create a dramatic or ironic contrast (a subtrope of Soundtrack Dissonance). Or sometimes they just want to create something really cool that will draw a lot of viewers, Canon be damned.

Note that extremely heavy symbolic content may sometimes resemble Bait-and-Switch, but only if the audience is too dense — or the creator too clever — for them to figure it out.